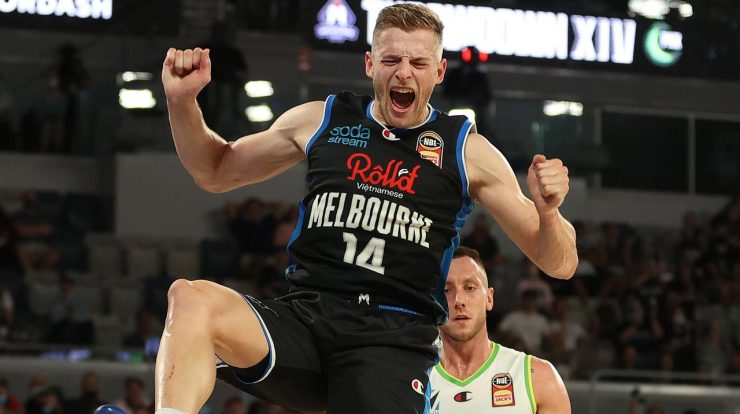 There were no fisticuffs or fireworks but the Melbourne Throwdown has produced another stunning basketball treat.

What the highly-anticipated bout between cross-town rivals Melbourne United and South East Melbourne Phoenix lacked in fireworks, it more than made up for with a physical contest that alternated between beautiful and ugly basketball — punctuated by an edge-of-your seat finish that was sealed, as it so often is, with a Chris Goulding three.

Watch Every Game of the 21/22 NBL Season Live & On-Demand with ESPN on Kayo. New to Kayo? Start Your Free Trial >

In a back-and-forth last quarter packed with highlight-reel plays, Goulding found himself wide open in the corner and the ball touched nothing but twine, ensuring United would avenge its last-start loss to the Phoenix and dampening what had been a gallant effort from their Melbourne rivals.

Apart from a little burst in the third, Goulding had been kept quiet by elite Phoenix defenders Ryan Broekhoff and Izayah Le’afa, but every United win features a moment from the captain and so it was here, his three establishing a match-winning five-point lead with 43 seconds left.

United’s winning machine Jack White added to his mystique by coming alive in the last, with a huge alley-oop jam and then a one-two-three put back that gave United the momentum it needed to escape with victory.

United coach Dean Vickerman was pleased his side had cleaned up its slow starts and was able to find something when the whips were cracking.

“I thought we came out with the right energy, moved the ball well and we had a 30-point first quarter,” Vickerman said.

“(We were) solid defensively as well.

“(We) finish the half-way point of the season at 10-4 and still with a lot of improvements (to make).”

Phoenix coach Simon Mitchell conceded it was a missed opportunity for his side to establish top-spot on the NBL ladder and a winning run over United.

“The opportunity presented itself and it was disappointing to come out the way we did and have to warm our way into the game, we’ve got to be better than that.

“We’ve got to be straight off the bat, ready to go, I can’t really explain as to why we looked so hesitant.

“Credit to Melbourne, the way they lifted the defensive intensity.

“It’s a good reminder for us as to where we need to get to as our development continues.”

Welcome to the Jo show

On the first play of the game, Chinese tower Qi sent Lual-Acuil packing, swatting away his effort at the rim.

From there, it was all the South Sudanese phenom, who splashed a pair of three-pointers for United’s first points and then scythed his way through the heart of the Phoenix defence, getting to the free throw line six times and finishing around the rim.

The 27-year-old put the exclamation point on an incredible quarter with a massive two-handed jam on Qi’s head, burrowing into the lane as time expired.

United’s defence was stifling. Everything the Phoenix got they were made to work so hard for.

The aggressive Phoenix talisman was held in check by United stoppers White and Mason Peatling in the first but got rolling in the second with 10 points for the quarter as the Phoenix whittled away at United’s lead.

It’s safe to say, the last 40 seconds of the second were 40 seconds United import Caleb Agada would like back.

He blew a wide open layup under the hoop, hit the side of the backboard on a three-pointer and then fouled Xavier Munford on a half-court heave with 1.2 seconds left.

The Phoenix import, on his return to the line-up from a bout of Covid, made two of his three free throws, capping off an 11-0 run that, somehow, gave the green side of Melbourne a lead at the long break.

The Phoenix stayed rolling too, extending the scoring streak to 19 without an answer, Vickerman pulling his team together in the middle of the JCA court to give them a spray.

He said he was heated as United fell away from the things that make them great.

“I demanded a response for the way were playing,” Vickerman said.

“I challenged them to say is this how we’re going to respond when we’re challenged?

“Got a stand up time-out, there’s words that don’t need to be heard on the telecast, so that’s why the league allows us to do that.

“The boys took it well, it was a challenge to the collective to be better.

“Hopefully I don’t have to do that very often.”

It worked. United lifted as Creek picked up two quick fouls and Goulding hit a three and then a two before Lual-Acuil bobbed up at the buzzer again to reduce the margin to four at the last break, setting up the come-from-behind win.

Lual-Acuil was incredible, ending with a game-high 30 points to go with nine boards — his fourth 20-point-plus game in a row.

But Phoenix’s twin towers played a key role in keeping in touch.

Qi forced United to give up or change their shots time and time again and, when they did try it on him, he sent four of them back. He finished the game with 13 points and eight rebounds, while the athletic Ashley was the perfect foil, adding 13 and five. United’s young Next Star Ariel Hukporti was also impressive when he relieved Lual-Acuil as the four men produced a memorable battle of the big fellas.