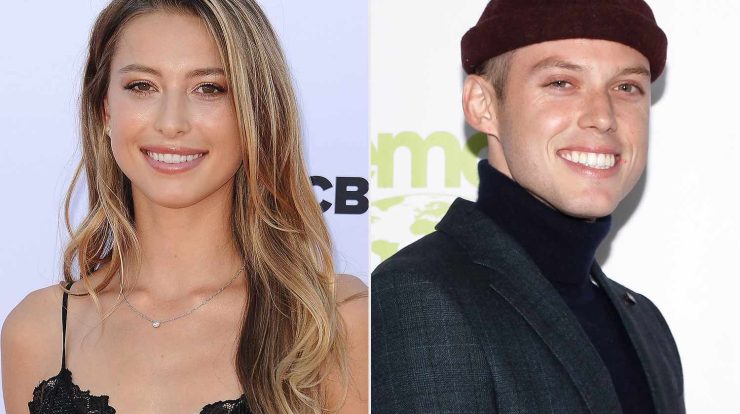 Eve Jobs took to Instagram to share a series of ‘team’ photos with her hunky boyfriend Harry Hudson as the two enjoyed various outings in beautiful locations.

It looks like Eve Jobs, 22, and Harry Hudson, 27, are definitely an item! The daughter of the late Steve Jobs and the Kardashian family friend showed off a ton of PDA in new cozy pics the beauty posted to Instagram on Jan. 30. The snapshots were the first ones Eve publicly shared of her and her new beau and they are cuter than ever!

In one pic, the lovebirds can be seen with their arms around each other while standing on a huge rock and in another, they’re holding hands while walking outside in a neighborhood. A third photo shows Harry holding Eve as they playfully stick their tongues out to each other while in front of a gorgeous backdrop of a setting sun. In the fourth and final pic, they are standing in front of a waterfront with their arms again wrapped around each other.

“team,” Eve captioned the pics along with a black heart emoji. Once she shared the post, it didn’t take long for her followers to leave comments that were full of kind and exciting words. “You guys are too cute,” one follower wrote while another sent them “so much love.”

A third called them “couple goals” while a fourth wrote, “Y’all look amazing.” Many more left red heart emojis with exclamation points to express their happiness for the young partners. Harry also left a comment for his girlfriend that read, “Forever as f**k.”

Eve’s new beau is not only known for being close with the KarJenners. He’s also a musician who’s released two albums, including Yesterday’s Tomorrow Night, which was released in 2018, and Hey, I’m Here For You, which was released in 2020. After moving to Los Angeles from Liverpool, where his mother’s from, he met Kendall and Kylie Jenner, who helped promote his music and in turn, led him to meeting siblings Jaden and Willow Smith, who he teamed up with to form MSFTS, an “art collective and lifestyle brand that encompasses music, fashion, education and more.”

Eve’s latest pics of her and Harry are quite the contrast to the ones she usually posts. The equestrian star, whose mother is Laurene Powell Jobs, 57, loves to share incredible photos of herself posing on top of her horse while showing off her riding skills at festivals and competitions. She also often shares pretty modeling photos and pics of herself just hanging out with her friends like any other gal in her early 20s.