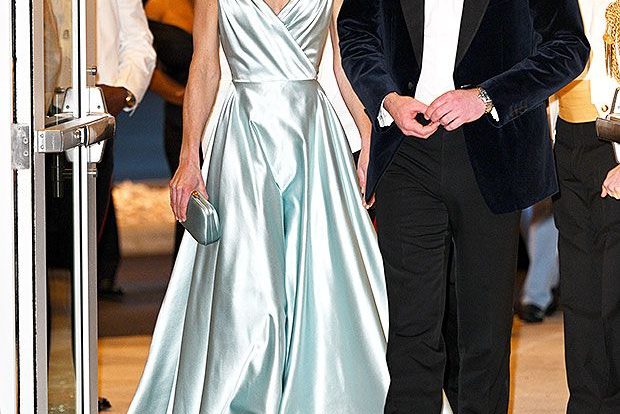 Kate Middleton stunned in a Cinderella-esque blue gown just after she was spotted wearing shorts for the first time in years.

Kate Middleton gave off some stunning Cinderella vibes while on their annual Caribbean trip. She stunned in a light blue satin dress with straps that slid down her shoulders and held a matching clutch as she walked beside Prince William. He looked just as classy wearing a tuxedo and a fancy bowtie. The two definitely looked like royalty in their elegant attire.

Earlier today, Kate rocked a completely different look. The Duchess showed off her long legs in a pair of shorts. She has only been spotted wearing shorts twice in her time in the public eye. The most recent time was in 2019 and the time before that was ten years prior. She paired her khaki shorts and brown woven belt with a classic polo.

Kate has been pulling off some fabulous looks for this Caribbean tour. She stunned in an emerald green gown that was decked out with feathers and sparkles as she dined in Jamaica. Meanwhile, she looked fabulous in a custom, hot pink metallic dress by British designer, The Vampire’s Wife while in Belize a few days prior.

Kate and Prince Williams have certainly had their sights set on world matters. When Russia began its invasion of Ukraine, they spoke out on the matter and their own personal connection to the country. “In October 2020 we had the privilege to meet President Zelenskyy and the First Lady to learn of their hope and optimism for Ukraine’s future,” they tweeted. “Today we stand with the President and all of Ukraine’s people as they bravely fight for that future”

However, another statement they made about the conflict put some people off. As the two visited the Ukrainian Cultural Centre in London to support the relief effort, Prince William made a speech that was deemed insensitive. “Everyone is horrified by what they are seeing. The news every day, it’s almost unfathomable to actually witness it, to see it. For our generation, it’s very alien to see this in Europe. We’re all right behind you,” he stated. In saying that it’s “alien” in Europe people felt he was trying to claim Europe was more civilized than other continents.