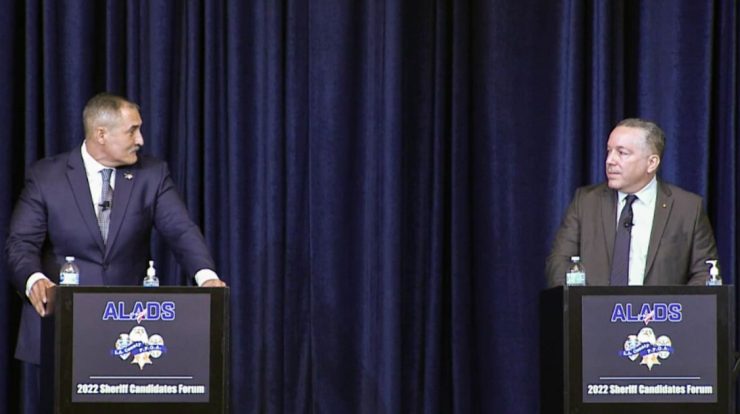 Candidates running for Los Angeles County sheriff took the stage together for the first time Wednesday evening, trading platform ideas — and some insults — during a forum hosted by deputy unions.

Much of the debate focused on the department’s $3.5-billion budget and incumbent Sheriff Alex Villanueva’s fractured relationship with the elected officials who oversee it.

“The Board of Supervisors funds us. Open hostility is not a plan of the future, it is the plan of our demise,” said Britta Steinbrenner, a captain in the Sheriff’s Department who heads security for libraries, hospitals and other county buildings. “I want to eliminate the division within the department.”

“You’re being defunded, right before your eyes,” Rodriguez said in remarks directed at deputies. “They’re not going to re-up the contract under this sheriff.”

Villanueva touted some of his initiatives in office, saying he turned a budget deficit into a surplus, rolled out body cameras for deputies and managed coronavirus in the jails.

The forum was hosted by the Assn. for Los Angeles Deputy Sheriffs and the Professional Peace Officers Assn., unions that represent sheriff’s deputies and supervisors. At stake are endorsements from the unions, which would likely offer a significant boost to a challenger’s chances or help solidfy Villanueva’s hold on the job. The deputy union poured $1.3 million into supporting Villanueva in 2018.

The importance of winning the unions’ support has grown since the Los Angeles County Democratic Party, another influential force in the race, chose not to support any candidate.

Cecil Rhambo, LAX Airport Police Chief who retired from the Sheriff’s Department in 2014 as an assistant sheriff, generated the most support of any candidate when the Democratic Party held an endorsement vote, but members could not reach a consensus and decided not to endorse a candidate ahead of the June primary election.

After Wednesday’s forum, Rhambo, who is viewed as one of the most viable challengers to Villanueva, told The Times that he had considered dropping out of the race but ultimately decided to stay in.

“We really have to galvanize around one strong candidate, and what I saw was a lot of fracturing going on. And this isn’t about me,” he said. “If I was going to be a distraction and detract away from what really needs to be done, which is getting Alex Villanueva out, I had to contemplate that.”

During Wednesday’s forum, Lt. Eric Strong, a candidate who oversees operations at four courthouses, criticized what he described as an unfair promotional process within the department. “Right now, to get the executive ranks, all you need is a tap on the shoulder,” Strong said. “That is no way for the largest Sheriff’s Department in the country to have its leaders selected.”

Those sentiments were echoed by Cmdr. Eli Vera, once a close advisor to the sheriff who was demoted by him after joining the race. After Villanueva’s closing remarks, Vera quipped: “You forgot the fourth pillar: Retaliate.”

All but two candidates, Villanueva and Rodriguez, said they’d enforce the county’s vaccine mandate for employees. All but one, Strong, said they support rebuilding the decrepit Men’s Central Jail in downtown L.A. Every candidate said the county district attorney’s office should reverse a current policy that blocks prosecutors from seeking longer sentences for certain gun and gang crimes.

Villanueva challenged his opponents to support efforts to remove Dist. Atty. George Gascón from office. None of them said whether they think Gascón should be recalled.

Villanueva has repeatedly blasted the vaccine mandate, saying he won’t force his deputies to get inoculated. He said he is, however, requiring unvaccinated employees to get tested weekly.

Rodriguez took an even stronger anti-mandate stance, questioning Villanueva for threatening to discipline or terminate employees who refuse to share their vaccination status.

“If someone refuses to either get vaccinated or submit to weekly testing, yes, I have an obligation as an employer to safeguard the safety of the public,” Villanueva replied.

Robert Luna, the only candidate not to have worked for the Sheriff’s Department, retired last month as the Long Beach police chief. He was questioned by Vera about his experience running large jails.

“For me, going in as the sheriff, I’m going in with somebody with a lot of experience, but the first one who will say, I don’t know everything,” Luna said. “So I would rely on people like yourself or others that are still employed at the Sheriff’s Department, who are experts, or experts around the country, to do whatever they can to make sure that we’re running the best jail in the country.”