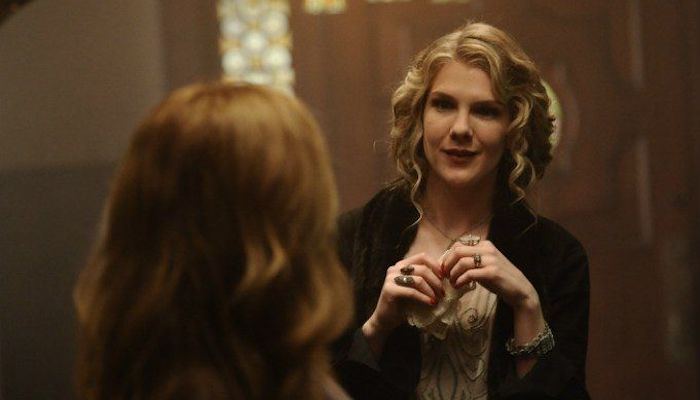 Now, Lily Rabe has revealed that filming for the upcoming season reminds her of a particular fan-favorite storyline from years ago.

After facing delays amid the COVID-19 crisis, filming for season 10 finally began late last year. For Lily Rabe, being on the set of American Horror Story again is bringing back some major nostalgia vibes. In fact, she is comparing the upcoming season and the energy on set to the fan-favorite season American Horror Story: Murder House.

“Ryan Murphy is one of the greatest people to work for. There’s a reason that those who work for him continue to work for him,” she tells Forbes. “I can’t believe this is season ten. I think the fact we get to have so many of the same people returning this season, there is this feeling of coming home. You get to tell a new story, play a new part, but the backbone of the thing is solid. It is wonderful getting into the sandbox again and have Ryan at the helm. I’m excited about this season, and I’m not alone in that. You can feel the energy on set. It’s just like it felt on season one.”

Although Ryan Murphy prefers to stay cryptic regarding AHS, big details regarding season 10 have already been revealed. Last fall, Sarah Paulson hinted that a controversial plot from a previous season may make a return in season 10.

Then, in November, Murphy finally unveiled the official poster for AHS season 10. The image features a fang-filled mouth getting a tongue tattoo, an image similar to one Murphy shared on his Instagram months prior. Many theorize the sharp teeth could be a hint that season 10 will include mermaids. As well, Murphy tagged the post in Provincetown, Massachusetts, a location fans began theorizing about last year.

Finally, last month, the actual theme for American Horror Story season 10 may have been revealed. According to CBS Boston, the Provincetown Select Board approved Murphy’s plans to film a project called “Pilgrim” in Cape Cod. The name of the project could be a major hint to what season 10 is about.

“There have been many inquires for information about the Ryan Murphy filming of ‘American Horror Story’ season 10,” interim town manager Charles Sumner said. “The only information we have shared with the press is 20th Century Fox Television has applied for the filming of the production ‘Pilgrim.’”

Read more: LILHUDDY unveils Travis Barker-produced track “The Eulogy Of You And Me”

CBS Boston goes on to report that filming in the area is set to happen this February and wrap up in March. As well, according to the Cape Cod Times, 20th Century Fox submitted some vague descriptions of the scenes that will be filmed.

“In the application, there are bare-bone descriptions of what would be happening in the scenes,” the report says. “Such as people walking up the steps of the monument and around town, talking outside of a restaurant and vehicles driving about. The most vivid scene descriptions involve a Jeep driving along Route 6 and coming across a dead deer, and simulated gunfire in a cul de sac.”

Although it’s unknown if this “Pilgrim” project is actually American Horror Story season 10, it would make sense. Last year, Murphy shared a cryptic photo of a Provincetown beach, where he is reportedly filming.

Read more: This is why that Batman and Joker ‘Justice League’ scene had to happen

What are your reactions to Lily Rabe comparing season 10 to Murder House? What do you think the upcoming AHS season will be about? Let us know in the comments below.